Photographer Olis Garber shares the story behind the planning and execution of this composite of the Super Blood Wolf Moon Eclipse. 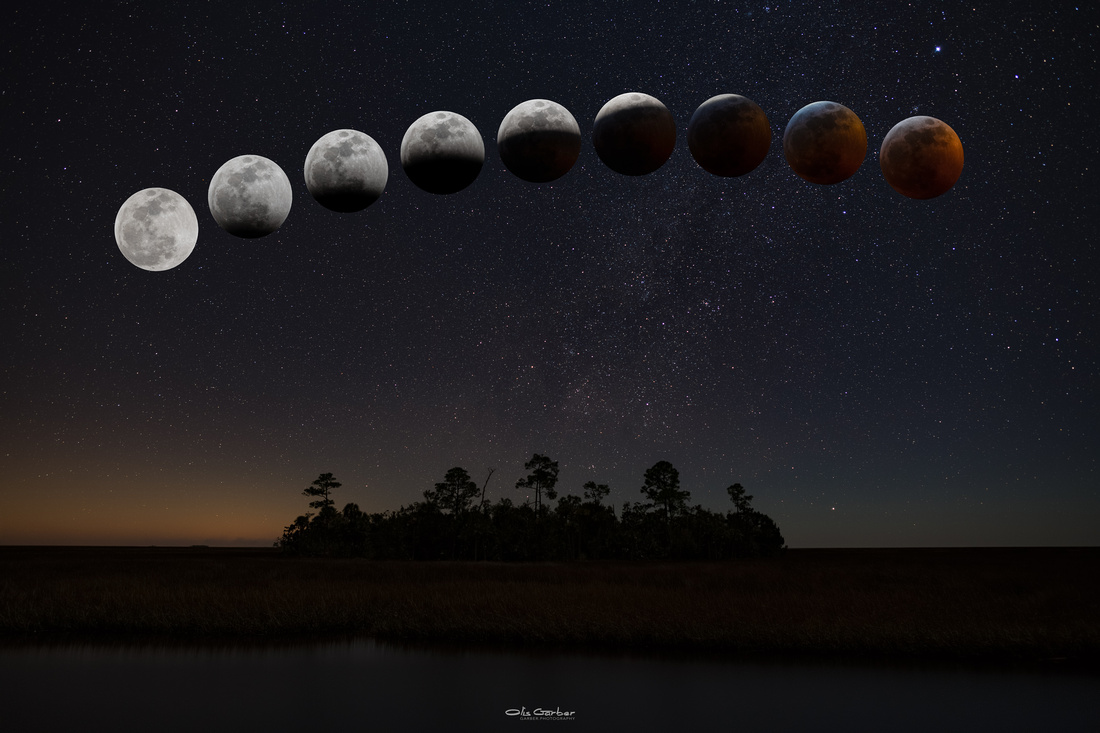 This is one of my favorite spots along the Gulf Coast of Florida for dark sky photography and is one of only a handful of dark sky locations I know of in the South East United States.  Keith Bartholomew and I found this spot the previous summer on one of our scouting trips.

Back in October 2018, planning for this event started.  PhotoPills with its Night Augmented Reality was used to look ahead on the night of January 20th and the morning of the 21st. From this, we got moonrise and sunset times, the path of the moon across the night sky, and the position of the milky way at maximum eclipse. 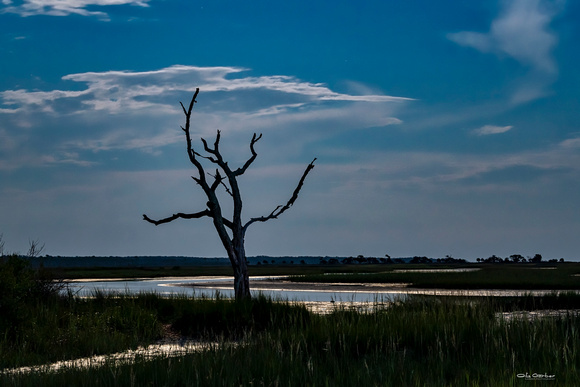 The day of the eclipse started at 10:45 AM full of optimism and conversation with the drive to the Gulf Coast. It included a side trip to another dark sky location to see if our favorite coastal tree survived the hurricane season, it did!  At 3:30 PM we arrived at our primary destination with two hours to spare.

Scouting for a landscape composition, I’m looking for an interconnected combination of foreground, middle ground, and background. Our plan from studying Google Maps was to be at a specific location that appeared to have good landscape elements for the moonrise and placed us in a dark sky area for photographing the lunar eclipse later that night.

On-site at 3:30 PM, the 100% cloud cover cleared as forecasted. But what looked good on maps turned out to be an open foreground of water, no middle ground, no leading lines. We spent the next 90 minutes scouting a half dozen other locations to no avail and that earlier feeling of optimism now slid towards despair as moonrise approached.

It was decision time. Giving up on perfection we settled for an unremarkable location with just enough time to get multiple cameras setup. Then the GPS on both iPhones missed the exact spot of moonrise. Even with calibrated iPhones, when we finally spotted the moon, it was at least 10° off where the apps (PhotoPills and The Photographer’s Ephemeris) pointed.  The result, a last-minute 30 yard scurry with cameras, lens, and tripods, jockeying for a viable composition.

By the time my cameras were re-composed and ready, the moon had already risen uncomfortably high for a “last chance” moonrise that evening.  As fast as that part of the evening unfolded, it ended.  We packed and moved to a final shooting location reflecting on what just occurred and how the day had gone with 8 hours in and 11 hours to go, well perhaps those thoughts are best left to the imagination. This brings me to my favorite things about landscape photography; being with friends, sharing insights and techniques, common goals, a commitment to the mission, and the adventure! 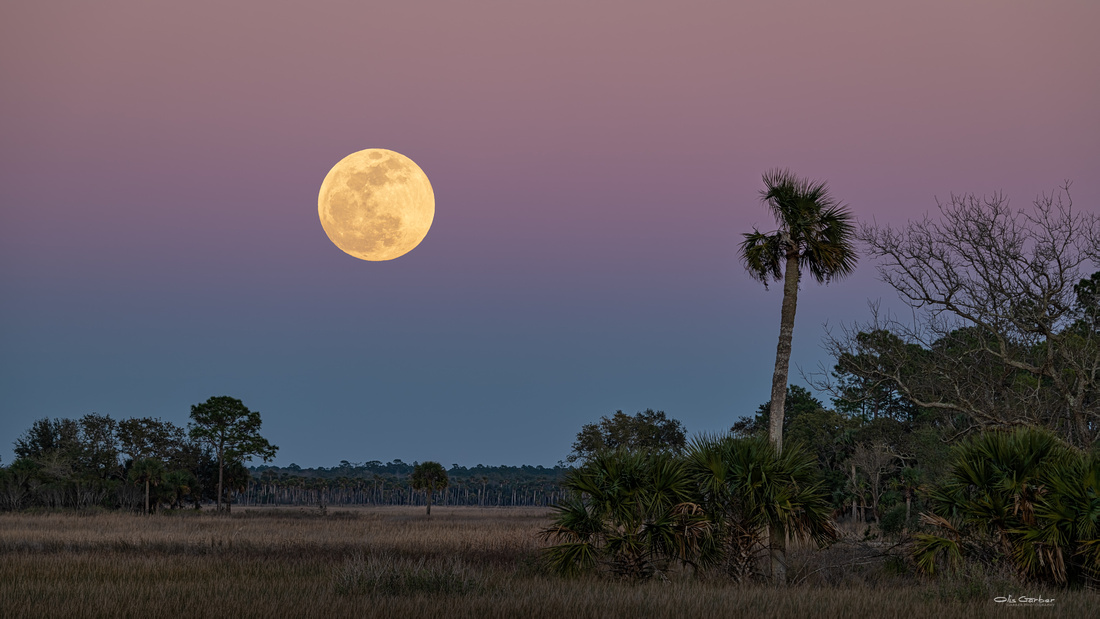 20 minutes after moonrise and several hundred yards down a gravel road, we selected this island surround by salt marsh to spent our next 8 hours. 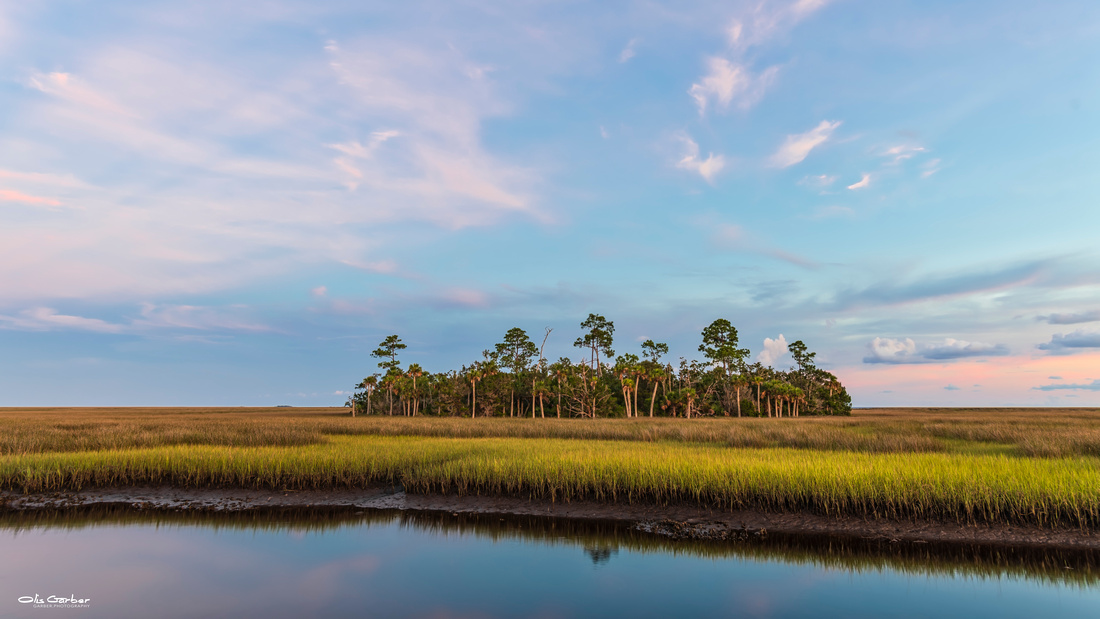 Marsh Island SunsetLife at sunset along a Florida salt marsh, the transitional area where a North Florida river meets the Gulf of Mexico as day transitions to night.

For the image, it was always going to be a composite that I’d create in Photoshop with an eclipse sequence positioned over the island. The questions going in were how dark would it get, would the milky way be visible and would there be a twilight like an event on the horizon around the island during the middle of the eclipse? The Island would initially be lit by the full moon and images taken during this time would show a blue sky with stars, a typical full moon night-scape. Then a few hours later, it would only be lit by stars and maybe a dark reddish moon. Can this light transition be recorded in an artistic, meaningful way, and technically, will I be able to set up my cameras to capture this?

It's been a while since I've experienced a night this chilly in Florida, but it's much better than the spring, summer, and fall alternatives of 90% humidity and mosquitoes.  At 2 AM the fatigue and cold won, we had enough. We packed our equipment and did the 3 hours drive back to Jacksonville. 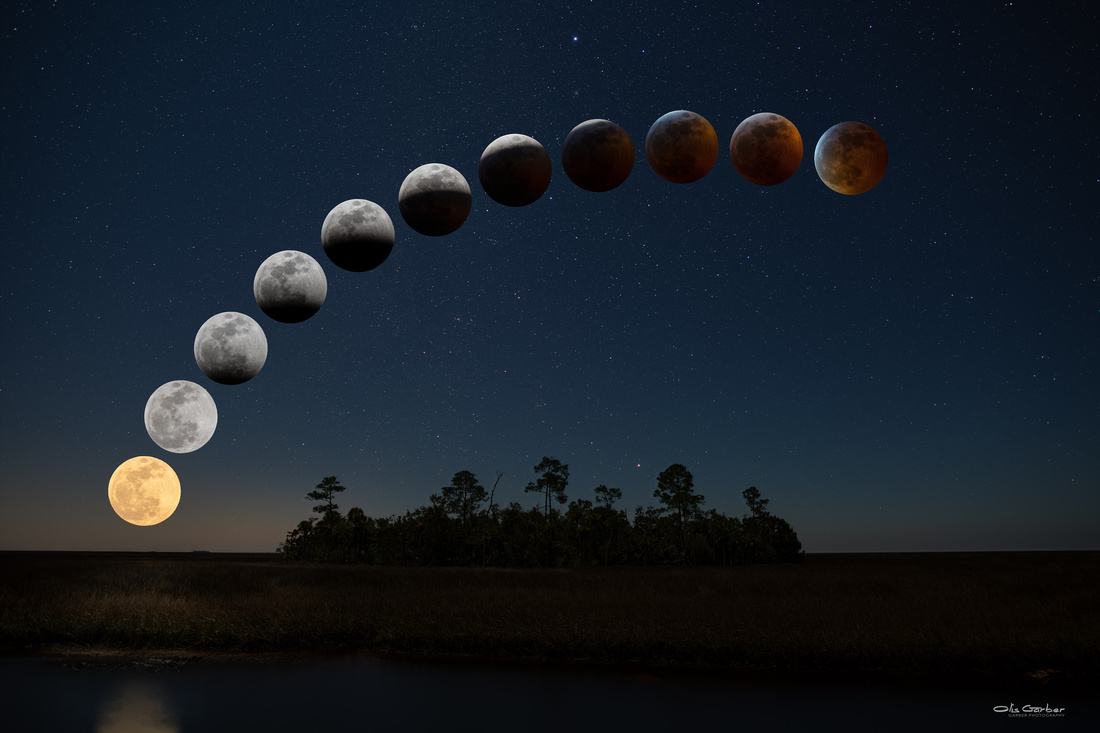 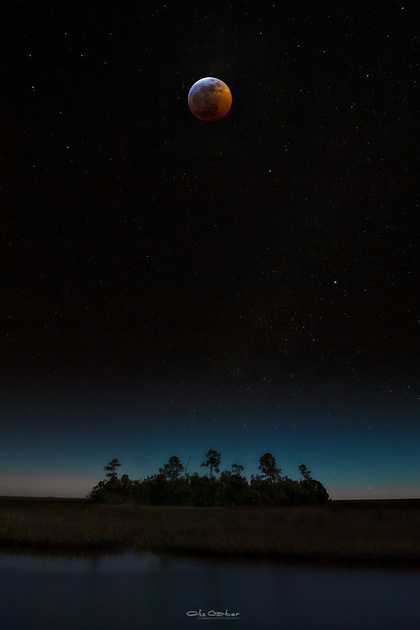 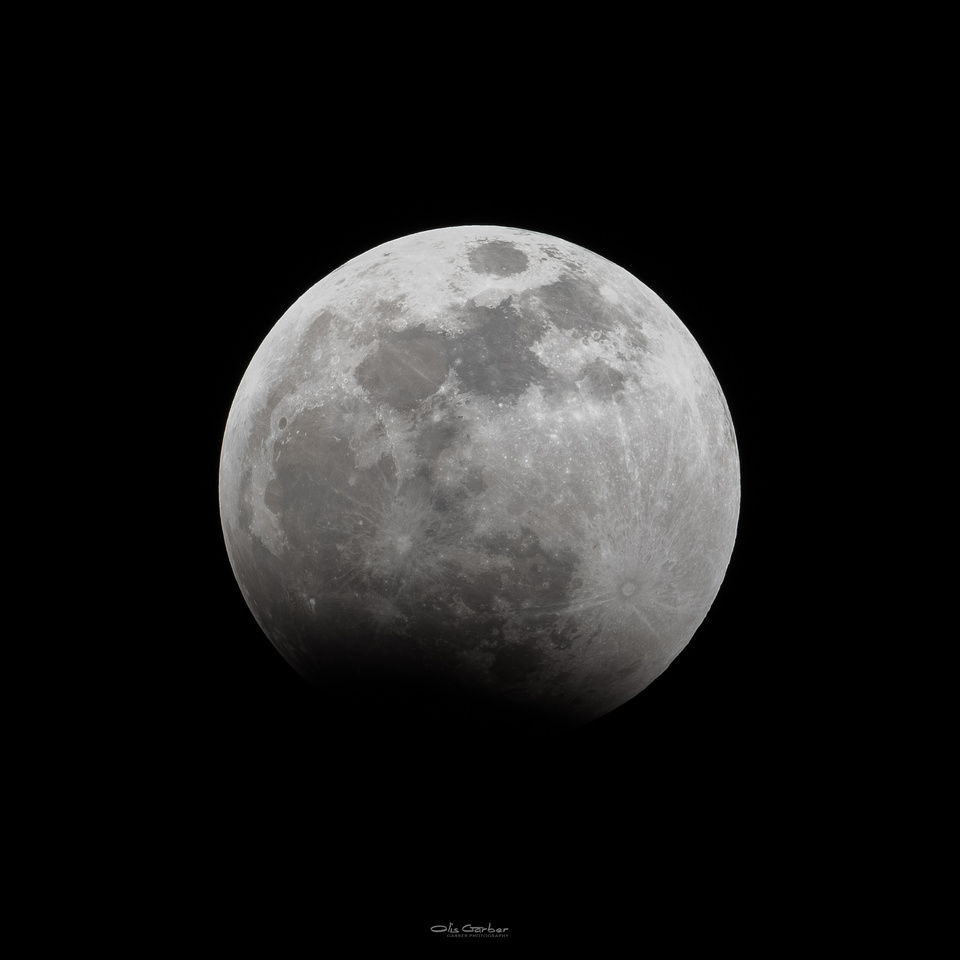 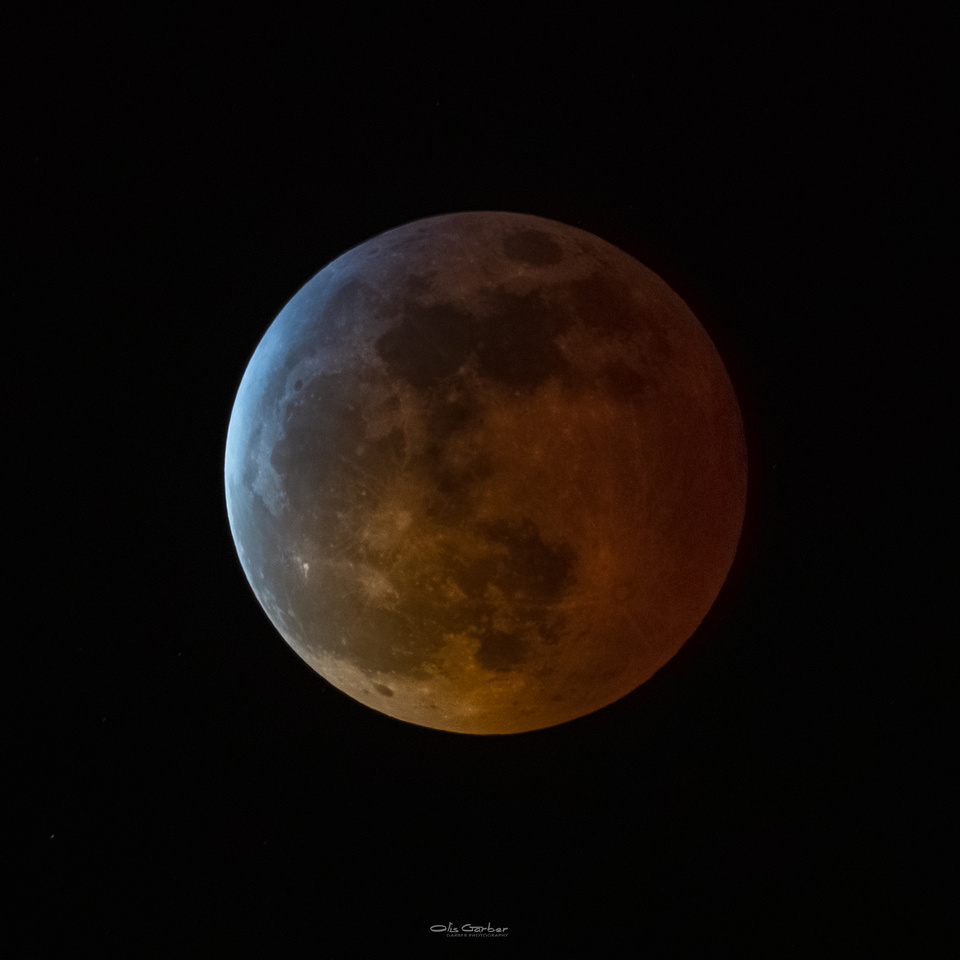 At the moment not quite so much but now remembering that night that started with a marsh landscape clearly visible under a super full moon, a night that perceptibly changed into one so dark you couldn’t see a hand in front of your face and overhead, a sky that became an infinite black palette of shining stars with a small faint orange ball in the center.  A ball that eventually grew back into a full moon that faded the stars back into a milky sky.  Now looking back at that night in the comforts of home and years ago, I can say in hindsight, that's why I'm a photographer.